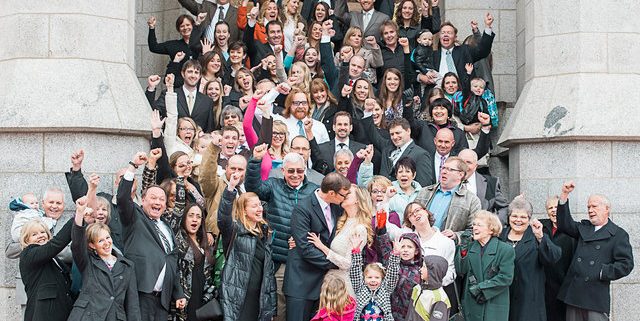 By The New York Times

Planning an entire wedding in 5 days, some say she might be crazy, others might say she is in love. Either way sending out wedding invitations via text message was pretty creative! Congratulations Emily and Rob!

It was the day before my wedding, and I still didn’t have a dress. In less than 24 hours, family and friends would be gathering to celebrate the occasion, and at this point my “something borrowed” was going to be an entire church outfit. Was I concerned? Not really, and not for long. I decided to throw a Hail Mary at my mom by asking if she would make a skirt to match the $10 top I found. She did. And it was lovely.

My wedding dress was just one of many things I wasn’t concerned about.

For example, five days earlier (on a Thursday, which also happened to be New Year’s Eve), I was on the phone with the woman who would become my banquet coordinator. The conversation took place about an hour after I was officially engaged (with an $8.88 Walmart wedding ring purchased that morning) while hiking in the Sedona Verde Valley in Arizona.

HER (choking cough) “Excuse me? You’re getting married in five days, and you’re just calling me now?”

ME “Well, I actually think I’m being quite generous. I just got engaged, and you’re my first call. I figured I should work out some logistics before texting everyone. And no, I’m not pregnant.”

HER “Well this is unusual. How many people are you expecting?”

HER (cough) “One hundred people with five days’ notice?”

Read the rest of this story at NYTIMES.com